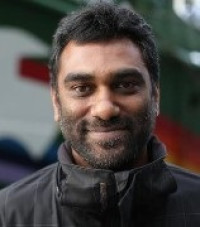 Kumi Naidoo is a South African human rights activist and the former International Executive Director of the international environmental group Greenpeace, the first African to head the organization. After battling apartheid in South Africa in the 1970s and 1980s through the Helping Hands Youth Organisation, Naidoo led global campaigns to end poverty and protect human rights. He has served as the Secretary-General of both the Global Call to Action Against Poverty and Civicus, an international alliance for citizen participation. Recently, he has led the Global Call for Climate Action, which brings together environmental, aid, religious, and human rights groups; labor unions; scientists; and others.

An interview with Kumi Naidoo, International Executive Director of Greenpeace International, about how to fix the current democratic deficit and strengthen the role of civil society in pushing for fundamental change.