Why a Great Transition?

The world is becoming more connected, binding people and planet into one global system with one destiny: history has entered the Planetary Phase of Civilization. The long tentacles of commerce, communication, and culture are weaving nations and regions into a single planetary fabric. Humanity’s transformation of nature has grown to the scale of the biosphere, compromising its capacity to support life. A world stage is forming as a critical arena for contending forms of consciousness and political engagement. The Planetary Phase is transforming the earth and its inhabitants, a holistic shift in the structure of society and its relation to nature. Developments in many domains—values and knowledge, demography and social relations, economic and governance institutions, and technology and the environment – interact in an amplifying and accelerating global process.

The journey of planetary transition has begun, and its destination largely remains in human hands. Living in the interregnum between the world that was and what will be, we face ominous threats. Climate change, ecosystem impoverishment, and toxification threaten the environment. Ungoverned globalized economic and financial systems grow increasingly volatile. A crowded world is cleaved by cultural, social, and political fissures. As known dangers intensify, others, still unnamed and unknown, may be germinating. These portents darken the prospects for our nascent planetary civilization. Reinforcing one another, they could gather into a general global crisis. If we fail to mitigate destabilizing stresses, we risk sliding into a nightmare scenario: a grim, violent, and impoverished global future. The hour grows late, but we still have time to cultivate the values and take the actions for a transition to the planetary civilization our children and grandchildren deserve.

The Great Transition is a vision of civilization rooted in a new suite of values—quality-of-life, human solidarity, and reverence for nature—for the twenty-first century. Its premise is that the interdependence of the Planetary Phase can nourish a new consciousness, building an objective basis for the ancient cosmopolitan dream of global civilization. Our huge economies have created, in principle, the conditions for a post-scarcity society where attention can turn to quality-of-life: human fulfillment rather than material wealth as the measure of success and well-being. A sense of connectedness and solidarity can extend beyond nation and tribe to people in distant places, the unborn in distant futures, and other creatures of Earth. A sense of wonder and appreciation of the natural world can flow from an appreciation of our place in the web of life and dependence on Earth’s bounty.

One World, Many Places

We are, like it or not, one human family and one earth sharing a common fate. Globalism today is putting down deep roots, just as nationalism once did. From outer space, we see not artificial national boundaries, but an integral planet, the natural political unit for sustaining the biosphere, managing interdependent economies, and keeping the peace. This reality encourages a corresponding enlargement of identity to global citizenship, even in our pluralistic world of astonishing and cherished diversity. Correspondingly, three broad principles would guide democratic governance in a Great Transition: decisions would be channeled to the most local level feasible (subsidiarity); certain issues necessarily and properly would be addressed globally (irreducibility); and regions would be free to fashion diverse approaches to development, so long as they meet environmental, human rights, and other global responsibilities (heterogeneity).

Who will Change the World?

Which social actors can tilt history toward a Great Transition? Nationalism weakens the capacity of multilateral bodies to redirect development toward a sustainable and just future; the profit motive dominates private sector choices; and organizational and philosophical fragmentation limits civil society. With efforts dispersed and small scale, systemic deterioration overwhelms painstaking progress won here and there. Still, awakening public concern opens the way for a new force, already nascent, on the global stage: a global citizens movement (GCM). As a systemic movement, the GCM would connect issues and places in a common project to mute dangers and advance an affirmative vision of planetary civilization, embodying in its means the norms of its end: trust, transparency, and tolerance. Although such a cultural and political rising is by no means inevitable, it remains possible. The antidote to cynicism and despair is nurturing vision and hope through deepening our understanding of the challenge and building modalities for collective action.

Journey to Earthland:
The Great Transition to Planetary Civilization

The emergence of an organic planetary civilization has become both possible and necessary. What would it look like? How do we get there?

Great Transition:
The Promise and Lure of the Times Ahead

The classic essay on our planetary moment, global scenarios, and pathways to a just, fulfilling, and sustainable future. 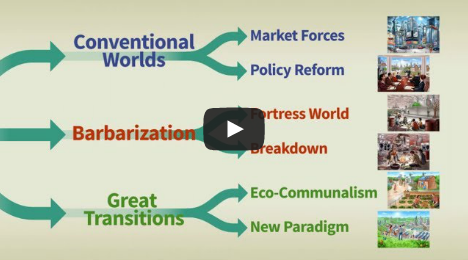 Visions of a Sustainable World
Interview with the GTI Director 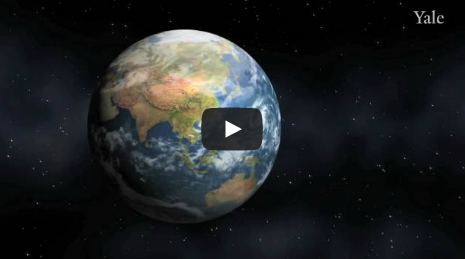