Breaking Past UN Impotence
Contribution to GTI Forum An Earth Constitution: Has Its Time Come?


The public is largely unaware that forming a world federal union government is the solution to critical world problems, or that the Earth Constitution is the key to the needed changes. The United Nations, hampered by its fatally flawed Charter, is trying to resolve global problems with one hand tied behind its back.

The drawbacks in the UN Charter are similar to those found in the original US Articles of Confederation. Conflicts grew between the thirteen colonies. In response, the founding framers abruptly abandoned the Articles and replaced them with a federal constitution. Although not all of the colonies immediately accepted this new type of governance, eventually they all joined the federal union.

Much like the Articles of Confederation failed, the UN Charter has failed. The UN has not been able to save the world from wars, weapons of mass destruction, climate change, or human and environmental injustices.

The Charter's defects have been no mystery to world federalists who know what is wrong, and know what changes are necessary. And yes, the time for the Earth Constitution is now. It can serve as a guide and model for the UN General Assembly to transform the UN to a democratic world federal union with enforceable world law.

The Earth Constitution is specifically designed to correct the defects which prevent the UN from doing what is needed to resolve life-threatening global problems. It represents a "fast track" strategy similar to the adoption of the US federal constitution. Some world federalists prefer a "slow track" which models its strategy after the gradual development of the European Union.

A breakthrough strategy is already underway thanks to the visionary work of the World Constitution and Parliament Association. WCPA's Earth Constitution is waiting in the wings, ready to go.

The Earth Constitution represents a potentially powerful living symbol to inspire, lead, and guide our troubled world out of danger. A real breakthrough is possible. It will be possible to explain concretely how global challenges can be handled by the UN under the Earth Constitution compared to the UN Charter.

The potential breakthrough comes through Article 109-3 which legally requires Charter review, but which has yet to be completed according to the Center for UN Constitutional Research (CUNCR). The UN General Assembly could launch Charter review opening the door for the Earth Constitution. Democratic World Federalists call this strategy “The San Francisco Promise.”

Despite the urgency of a world out of control, many world federalist organizations have held back from fully embracing the Earth Constitution. Part of this reluctance may have to do with insecurity caused by unproven assumptions, which I believe are "myths."

Myth 1: We don't need to change. We can handle the world's problems with the present UN and its 193 sovereign, independent nations. [Wishful thinking.]

Myth 2: We cannot succeed until we have "unity." [But there will always be doubters.]

Myth 3: We must first gain a large membership before we can hope to make the necessary changes. [The history of revolutions is full of the unexpected, of surprise, of the unlikely often brought about by a small group of people.]

Myth 5: "World federal government is not possible until the Year 2045." [We can't wait this long. The psychological error here is the danger of a self-fulfilling prophecy.]

The Earth Constitution strategy allows us to move quickly. We cannot wait twenty-five to fifty years for the UN to become a world federal government as proponents of the European Union model advocate. That is unrealistic. The Bulletin of Atomic Scientists has the doomsday clock close to midnight.

During the signing of the Charter, the US government made a mockery of the UN's ideals by dropping the horrendous atomic bombs on Hiroshima and Nagasaki. The other Permanent 5 (P-5) veto powers on the UN Security Council have also betrayed the UN's core mission and, like the US, have refused to accept international law for themselves.

The US is the leading weapons dealer in the world. Its foreign policy is based on militarism, secret operations, economic warfare, and nuclear weapons rather than on cooperation, respect, and true caring. The P-5 powers all have used threats of violence or violence and refuse to accept for themselves the International Criminal Court and international law.

The world community and the UN General Assembly must take over from the Security Council P-5, whose undemocratic status lacks legitimacy. The P-5 should no longer be allowed to remain above the Law and to commit world crimes with impunity.

There comes a time when the dangers to our beloved world become too much for the existing UN geopolitical system—it's time for system change. A decisive and bold strategy highlighting the Earth Constitution could make the difference and become the inspiration for a worldwide peace and justice movement for a "new UN" and the establishment of a democratic world federal union.

Roger Kotila is a psychologist and peace activist. He is president of Democratic World Federalists and editor of Earth Federation News & Views. 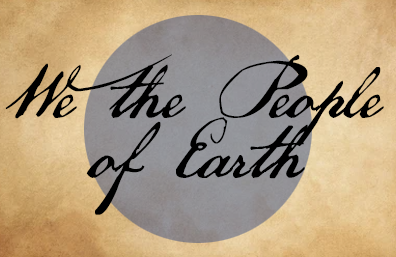