Population growth, we would argue, should not be a primary concern, but words alone cannot fully express the problem. Consider then the following graphs: 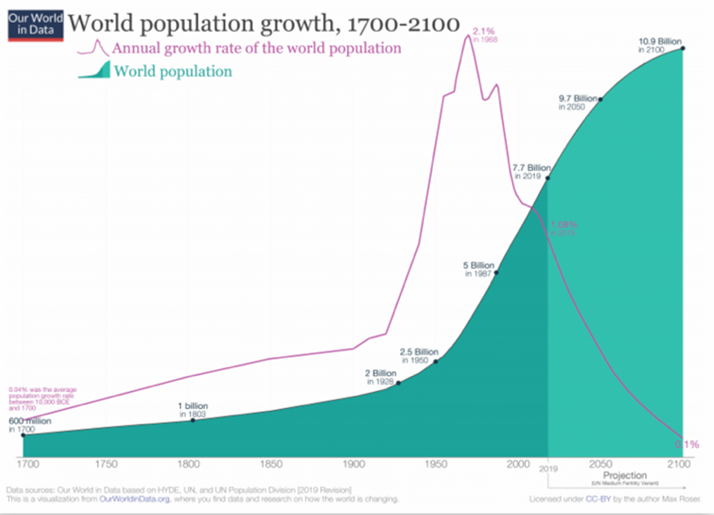 The rate of population growth peaked in 1968, the very year that Paul Ehrlich and Garret Hardin justifiably freaked out. But then it declined so steeply that world population will level off by the end of the century, and the precise number is unimportant. Ian Lowe says that "[s]trong support for family planning could mean 30% fewer people in 2100 than in current UN projections and thus greater odds for a livable planet." But the climate crisis is imminent, and if we do not turn down consumption immediately, the planet in seventy years will have zero odds of being livable.

Lowe claims that "[i]n the absence of significant changes in lifestyle, energy demand is directly proportional to the number of people using the energy." But right now, which is all that matters, "lifestyle" (consumption) grows exponentially, far outstripping population increase.1 The lower graph shows atmospheric CO2 (left vertical axis) and temperature (right vertical axis) rising together, closely tracked by the red curve of GDP.2 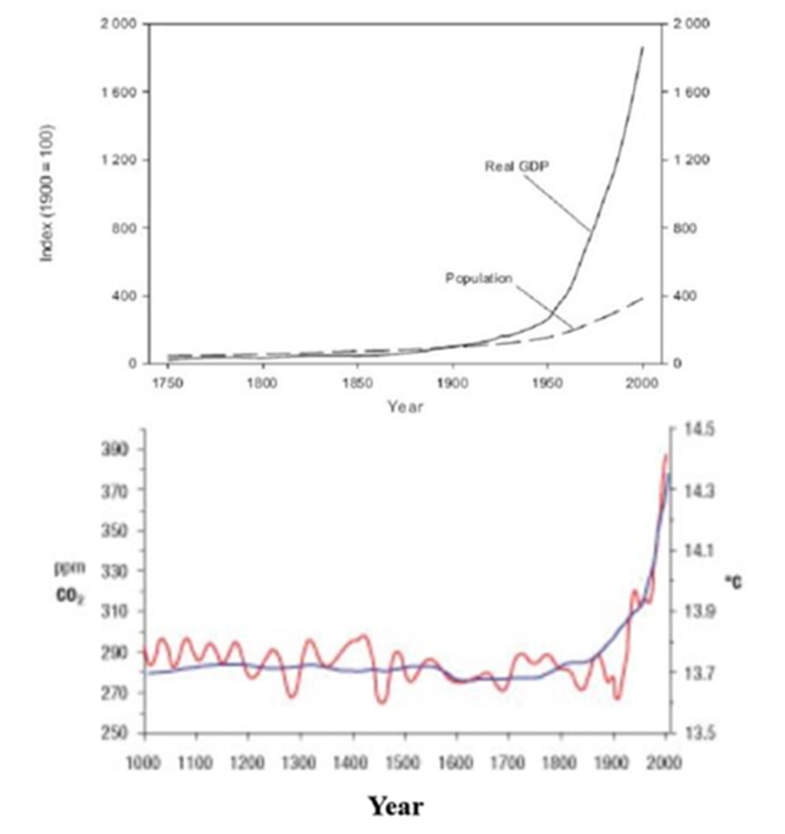 Lowe notes that Brazil and Indonesia are in the top ten countries for total emissions, as though the cause is population, but much of Indonesia's emissions stem from deforestation due to commercial logging and oil palm plantations, and these are driven by First World consumption. Turn down the world economy, and Indonesia's emissions will follow. Lowe identifies as the core question whether we can “limit global warming to less than 2 °C—as science says we must—without accelerating the transition to lower fertility." But the curve of population growth is already declining so steeply that further steepening cannot impact climate warming over the next critical decade.

The demographic transition to low fertility occurred in country after country as parents gained confidence that their first few children would live. Then there was no advantage and plenty of disadvantage to having large families. People responded to a radical shift in social conditions by changing their attitudes––and they controlled the means of their reproduction. One lesson––perhaps it is even a principle of human behavior––is that when people feel safe, they are more likely to behave rationally. Right now, the only rational response to the GDP curve is to turn it down immediately, and to do that people must feel safe. Furthermore, since consumption is driven strongly by local comparisons, people must also feel locally more equal.

A sense of safety and local equality does not require raising consumption for everyone south of the Sahara or on the Indian subcontinent or in Central America to US levels––as implied by the IPAT equation. In fact, the US leads in creating what Herman Daly calls "illth." Our unbridled consumption delivers worse health. Our consumption is driven by our loss of essential daily satisfactions from work, physical activity, and social connections––it is our failing effort to stave off despair and rage. "Poor" countries should certainly not follow our path; rather, they should preserve community life by making it safer.

Safety and local equality require (1) reducing terror now wreaked on civilian populations by warlords and drug cartels; (2) protecting and reinvigorating local, sustainable agriculture, which has been nearly destroyed by industrial agriculture in the name of the "green revolution"; and (3) preparing proactively for the coming droughts, storms, floods, and fires by stockpiling necessities that will allow communal life to continue in place. Otherwise, there will be massive migration and chaos. The resources—the means of production—needed to make the world safe for democracy exist, but they are held by a handful of oligarchs who must urgently be confronted.

Peter Sterling is Professor of Neuroscience in the University of Pennsylvania School of Medicine and the co-author of Principles of Neural Design.