I write as a beneficiary of the existing system: I am a prosperous white Western heterosexual male. I am conscious not only of the privileges that I have undoubtedly enjoyed as a result of this Rawlsian accident, but also of the extreme limitations my experience places upon my perspective.

At best, therefore, I can say my ambition is to emulate a Joe Slovo or a Breyten Breytenbach: I hope to be an ally in the struggle.

I very much enjoyed the paper. It was exceptionally useful to be reminded, in such a clear and concise fashion, of the evolution of feminism, and I found the essay extremely helpful (as one who has become a little confused) on the nature of both intersectionality and solidarity politics. I was especially struck by the essay’s identification of three key aspects of solidarity politics (namely, leading identity politics to reach out to members of oppressed sub-groups; shifting the “target” to concepts, practices, and institutions that create and perpetuate structural inequality; and helping to build coalitions).

I also admired the way in which systemic change was inherent to the essay’s argument; the identification of the kinds of values that are (or must be) inherent to a “solidarity economy”; and the importance given to both ‘the provisioning of needs’ and the practice of care. I was pleased to read that “solidarity economy agency involves a blending of the best aspects of masculine and feminine agency’ and delighted to read the call of ‘shifting the lens from resist to build, from what we are against to what we are for.”

I am anxious that we need to understand the nature of the resistance to the “solidarity economy.” The system-as-is exhibits extraordinary resilience. Matthaei provides an example: “At its worst, this approach reduces feminism to ‘breaking the glass ceiling’ whereby a minority of women gains access to top positions, almost always by doing things the way men do them.” I see this less as a flaw in the (mainstream) feminism movement in the US and more as an illustration of the way in which the system resists fundamental change by a process akin to hysteresis.

Power elites (and their associated conventions, institutions, etc.) have become very effective, over a long period of time, at permitting just enough access from outsiders so as to have a twin effect: on the one hand, high-achieving outsiders (women, the working class, people from marginal communities, people of color etc.) do not merely enter the elite; they in some sense leave their origins. The capacity of their original “homes” (or communities) to challenge the system is thereby critically and incrementally eroded.

At the same time, the entry of “outsiders” sends a (political) signal that the system-as-is is adapting, is beneficent, is accessible, and so on; and, if the rate of access is well-managed, pressure from outside the system is continually dissipated at a rate that enables the system-as-is to persist. This is, I believe, the nature of its resilience.

My anxiety is thus that the promise of the “solidarity economy” may founder, not because it is not “a good idea,” and not because it does not have the potential to engage the energies of a great many individuals across a “movement of movements,” but because insufficient account has so far been taken of the nature of the resistance.

We need not merely to shift from “what we are against to what we are for”; we need strategies for overcoming what will, in all likelihood, be fierce resistance. (Note, too, that this resistance will be both overt and covert.)

Twenty-five years ago, I introduced flexible working arrangements into the company of which I was a (rather young) director. These included family-friendly policies to enable both men and women to change their working hours to fit with childcare arrangements, periods of leave for fathers, opportunities for home-working, and so on. I was both shocked and disappointed over the following few years that male colleagues did not take up these opportunities. When I investigated, the reasons were manifestly systemic: individuals were “locked in” to a particular way of thinking (about their lives, their careers and so forth), to particular ways of behaving (e.g., in terms of in-home roles), and to particular beliefs (e.g., in terms of status).

A few years later, I found myself in discussion with a lawyer who had been part of the Truth & Reconciliation Commission process in South Africa following the end of apartheid. She suggested that the racism she was encountering in the boardrooms of London’s businesses was, in an important respect, worse than the racism she had met in South Africa. In the UK, she often heard the refrain “Well, we don’t need to do any more about black people—look, we’ve got one already.”

A few years later, in a business with a majority of women in the senior management team (and a female Chair of the Board), we put considerable effort into attempting to run the enterprise on the basis of “blending the best aspects of masculine and feminine.” While we made terrific progress in many respects—and I remain proud of our achievements—the business frequently lost out to our competitors, competitors who retained intensely hierarchical macho cultures of long hours, presenteeism, and brutal “incentive packages.” We were—and remain—“locked-in” by the system-as-is.

Finally, and recently, I attended a conference in Paris organized by SmartCSOs, a capacity-building network that has been working on the Great Transition since 2010. The conference diverted sharply from the agenda on the third morning when a passionate and articulate group of women highlighted the fact that a discussion of the Great Transition had (yet again) proceeded as if the issues of intersectionality could be left until later. What was surprising—and relevant—is the reaction from within the room. Among a group of around 80 individuals—already sufficiently passionate about “the Great Transition” that they had travelled from across Europe and North America for a three-day “agora”—there was considerable (and I should say almost involuntary) resistance to what was, in effect, a proposition about the “solidarity economy.”

Together these examples give (I hope) an indication of my concern. (I have deliberately used practical examples from my experience rather than references from the literature: it will be in the domain of the practical and the everyday where this is won and lost.) The resistance is and will be both diffuse—because it is systemic—and focused—because there are elites that benefit considerably from the system-as-is.

A Question (or an Offer)

This leads to the question, how can an ally best contribute?

It may be—and herewith an offer—that it is my experience of being a prosperous white Western heterosexual male that might be most valuable. I understand the system, as it were, from the inside. I have a distinctive insight into the nature of the resistance. It may be—and this is deliciously ironic—that in this case my identity trumps my researches, my theorizing, my writing, my publications. To contribute fully, I must depend not on my ego, or my competitiveness, or my skills of persuasion. Rather, I must accentuate my vulnerability, my openness, my—and this is perhaps the key word—care.

(Needless to say at this point I do indeed feel pretty vulnerable, and a little foolish; but that, I understand, is exactly as it should be, and is a risk I feel compelled to take.)

Finally, it is my conviction that securing the next stage—of feminism, of a caring/sustainable economy, of a solidarity economy—must involve male voices speaking to men. Too many men have for too long been able to skip over the “women’s” pages of the newspaper and sidestep the challenge(s) of feminism through the simple expedient of “Well they would say that, wouldn’t they?” Even among progressives, it seems to me, there is a curious deafness to the challenge implicit both in contemporary feminism generally and in Matthaei’s argument in particular.

This male-to-male challenge will need to operate at multiple levels. It means men taking responsibility for raising the gender issue in meetings, rather than waiting for a woman to do it. It means men not only refusing to take part in panel discussions with no female participants, but actively challenging (male) conference organizers and other panelists about the matter. It means men, when they witness “everyday sexism,” not merely shrugging their shoulders but actively confronting perpetrators.

David Fell is director and co-founder of the research and strategy consultancy Brook Lyndhurst. He has been researching the environmental attitudes and behavior of UK consumers for nearly three decades. His work is concerned, in particular, with the development of strategies for promoting changes in individual and institutional behavior to bring about a more sustainable economy. 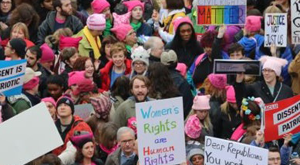