Author's Response to GTI Roundtable Human Rights
An exchange on the essay Human Rights: Advancing the Frontier of Emancipation


I want to thank all the individuals who responded to my essay for their thoughtful and thought-provoking comments and arguments. These comments covered such a wide range of issues and concerns that it is impossible to begin to do justice to them in my response. Instead, I have tried to identify some themes that were raised by more than one writer; and will address these themes, rather than trying to respond to the commentaries one by one.

One prominent theme in a number of the comments was the importance of human responsibilities, obligations, or duties. Evelin Linder called for the “globalization of care, trust, and responsibility.” Joseph Camilleri stressed the contributions of various non-Western cultures and religions that are more “preoccupied with duties as opposed to rights.” Camilleri also mentioned in particular the contributions of Gandhi, who drew on the “ethic of community, responsibility, and loyalty.”

I am particularly taken by these arguments because they are at the center of my next book, Human Rights and Responsibilities, based on the Castle Lectures which I delivered last October at Yale University (see https://epe.yale.edu/videos/castle-lecture-series-mystery-missing-duties-why-are-individual-duties-absent-human-rights). In the new book, I am arguing that to move human rights advocacy forward in the future, we will need to work politically and ethically to devote more attention to human obligations to promote rights. My previous book, Evidence for Hope: Making Human Rights Work in the 21st Century, was a full-throated defense of the legitimacy and effectiveness of human rights against a series of critiques that I believed were unsubstantiated historically and empirically. But in this new book, I elaborate my own critique of human rights advocacy for the insufficient attention it has devoted to collective and individual obligations.

In 2018, we celebrate the seventieth anniversary of the Universal Declaration of Human Rights (UDHR) and the American Declaration of Rights and Duties of Man, a Latin American declaration which preceded the UDHR by eight months. Looking back, we see that the work of constructing an ever more elaborate structure of rights has been impressive, but the gap in implementation is so great between the ideals in human rights law and the actual practice on the ground that it has created disillusionment and despair. (This was a point stressed by a number of the commentators, including Camilleri, Tarek, Anderson, Eisler, and Cabrera.) But rather than despair, the work needs us to drill down, to focus on better forging the links between rights and those who bear obligations for the fulfillment of rights. This is a project that is well underway in the world. It is not in its infancy at all, but somehow the rhetoric hasn’t caught up with the action. Many potential agents of justice and rights exist, not just countries, but also international organizations, non-governmental organizations, social movements, universities, and individuals. Changing practices that lead to violations of human rights and other structural injustices needs to be a collective social process, requiring multiple actors to work together in networks with one another. Some are already working in networks to try to fulfill their obligations, and yet our discourse has fallen behind our practices. We human rights scholars and activists have not found ways to properly talk about and theorize these networked obligations to fulfill rights.

Yet, many human rights scholars and activists still are skeptical or worried about the idea of stressing the role of political responsibilities, obligations, and duties to respect or ensure rights. As such, I was pleased to see how many of the commenters stressed these issues. I am thinking about these networked obligations as “political” in the sense stressed by theorists like Hannah Arendt and Iris Marion Young. They are political because they involve working together with others to “reorganize collective relationships, debating with one another how to accomplish such reorganization, and holding one another to account for what we are doing and not doing” to promote human rights and diminish structural injustices.1 Exercising such political obligations involves acting, exchanging ideas, and organizing in public space, as Arendt reminds us. But such collective action and networked obligations also may involve individual action that is a forerunner or conduit to work in public space. So, for example, organizing politically in the public space is essential, but so is the individual action of carrying out the civic duty of voting, in order to bring about necessary political change.

Let me illustrate this point with the case of the environment and climate change, an issue of vivid concern to many of the commentators. Some progressive writers and activists are so focused on rights that they bend over backwards to frame issues as rights claims, rather than speaking of responsibilities. For example, environmental activists have increasingly talked about our rights to a clean environment, the rights of trees, the rights of the Rivers, or the rights of Earth Mother herself, as reflected in the Pachamama laws of Bolivia and Ecuador.2 While I am not opposed to rivers, trees, or Mother Earth having rights, I think it is more practical and straightforward to stress the responsibilities of countries, corporations, states and municipalities, organizations, and individuals to protect trees, rivers, and the environment as a whole than to maintain our focus on these unconventional rights.

My purpose here is not to argue against rights as an approach to the environment or to other issues. I am a firm believer in rights, as anyone who read my GTI essay knows well. Nevertheless, in the next book, I am making an argument that is new for me, in favor of attention and action to human rights and the necessary networked obligations by multiple actors to protect and ensure rights. Some rights, to be genuinely enjoyed, require networked efforts by all of those connected to the issue, including individuals. I argue that in the world of human rights, a world to which I have devoted much of my scholarship and my advocacy, the language of political and ethical obligations is missing, and that loss is detrimental to the effectiveness of rights movements. We who believe in rights, we who think human rights comes as close as possible to a universal moral vocabulary and legal system capable of addressing repression and injustice, need to reincorporate political and ethical obligations into our world of rights. We need to begin talking explicitly about the ethics of obligation in the context of our work to promote rights.

A second theme discussed by various authors was about the relationship between human rights and the market or capitalism. There was not agreement among the commentators; some, like Aaron Karp writes that “if the right to own property extends beyond personal objects…then human rights could be said to defend a power system based on private wealth and top-down control.” Greg Anderson discusses that rights have an “uncomfortable complicity with the western capitalist common sense that has historically authorized, inter alia, imperialism, colonialism, mass industrial servitude, and environmental degradation.” Álvaro de Regil Castilla, on the hand, argues that “human rights, freedom, and true democracy are completely anathema to capitalism,” and as a result, the condition for “achieving the entire spectrum of human rights is to put an end to capitalism.” Evelin Lindner stresses that the “Global North aims to make a profit by pushing everything, including even the human rights mission, into competitive monetization.” These arguments are connected to related arguments in some academic and policy circles where it has become commonplace to hear people claim that human rights are somehow “complicit” with neoliberal economic policies. Mary Nolan, for example, argues that human rights and neoliberalism, or market fundamentalism as it is sometimes called, are similar because they both “adhered to methodological individualism.”3

Moreover, the human rights movement does not attempt to limit the role of the state in the same way as neoliberalism. Human rights organizations critique the state when the state was abusing the rights of individuals, but more often they have called upon the state to take up a more capacious role to further rights, often by protecting civil, political, economic, and social rights. The protection of civil and political rights requires not only that the state stop doing things, like torture, but also that it expand its capacities to do other things: for example, to protect due process by funding and training high-quality public defenders for the poor. In the area of social and economic rights, human rights advocates constantly urge governments to expand educational opportunities, health services, and social security. Neoliberalism, on the other hand, often urges the state to cut back its services.

A final theme I wish to address has to do with concerns raised by Alice Froidevaux about recent “highly alarming trends of restricting the scope of action for activists and civil society organizations” by means of the introduction or reforms of NGO or anti-terrorism laws that criminalize people trying to defend human rights. Luis Cabrera also invites me to share my thoughts about the “increasing sophistication of authoritarian governments and also democratic governments” working to undermine rule of law and human rights, including in the US. I recognize that many alarming human rights situations exist in the world today, and I am particularly worried about the current situation in the United States. But I also want to remind readers that human rights defenders have long been on the front line, and we should be cautious in suggesting that there was a better period for human rights in the second half of the twentieth century, for example, that has now been eroded in the twenty-first century. Some government actions, and particularly those involving new and invasive laws about registration and funding, are indeed new and threatening. Other threats have been almost a constant for civil society human rights organization over time.

By their very definition, human rights are needed when things are bad, and human rights activists are also rarely popular in the countries where they work. Repressive governments especially have a long history of attacking and vilifying human rights groups. Human rights organizations often defend the rights of unpopular minorities such as political leftists in Latin America, refuseniks in the former USSR, the Roma in Europe, and transgender people in the US.

In concluding, let me reiterate that nothing I say detracts from acknowledging the frightening challenges groups and individuals face, or the urgent need to strategize about how to respond to these challenges. But I am not persuaded that human rights are in a worse place than they have been before, and I believe that the frame of constant crisis itself could have negative consequences.

I would thus like to end my response quoting from the comment by Allen White, with which I am in complete agreement. “Human rights is a beacon of the possible, a story of moving a bold vision from the implausible to the inevitable.” I continue to believe that human rights movements offer important lessons and tools for a multifaceted global movement capable of driving transformative change in culture and institutions.


Kathryn Sikkink is the Ryan Family Professor of Human Rights Policy at the Harvard Kennedy School and the Carol K. Pforzheimer Professor at the Radcliffe Institute for Advanced Study. Her latest books include Evidence for Hope: Making Human Rights Work in the 21st Century and The Justice Cascade: How Human Rights Prosecutions are Changing World Politics. 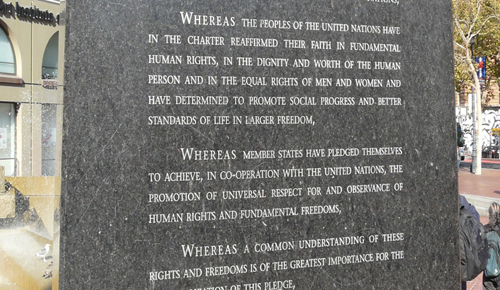