I am wondering why most of the commenters who have responded to this topic are men. Is it that women have no interest in the nuclear Armageddon, or are they loath to speak up in what is seen as a man’s area? My own feeling is the unspeakable rage that I feel that one can talk sensibly at all about these weapons of mass destruction, but even more that we single out the biggest and most destructive as though this will address the problem.

Nuclear weapons certainly symbolize a larger lack of trust and cooperation, but the reality is that getting rid of nuclear weapons alone will do nothing to improve the prospects of a human global family managing to live together on this planet. What is lacking, to put it bluntly, is the ability to talk about feelings, which is something women seem to have developed more, and without which this whole discussion becomes one of control and numbers which renders it to me almost totally meaningless. I am talking here about the validity of subjective experience, which needs to be acknowledged before any intelligent discussion about who we are or how we arrange our future can take place.

I have expressed before the opinion that men and women are not essentially different, that their biological differences do not define the qualities associated with masculine and feminine, as much research shows, and as we see in the range of gender categories now available for people, and children, to choose. But our institutions still insist on those binary categories, reinforced by media and entertainment. Men are taught very early on that their feelings need to be suppressed in order to be manly. And women still on the whole are the ones who are seen as “carers.”

Many of you, I am sure, have enjoyed watching the World Cup recently. It is well known that the incidence of domestic violence increases during a Cup Final. I noticed currently in a local hospital ads appealing to men not to destroy their lives when their team loses. As long as men are taught not to care, except about winning and losing, violence becomes the method of choice. We are part of a system which extols competition and turns a blind eye to the consequences.

Nuclear weapons are the logical outcome of this system. It is a system which reaches every aspect of our lives. To try to deal with nuclear weapons as though they can be approached as a separate problem makes no sense. The fact that they are bigger, and kill more people, and destroy larger areas, does not make them more important. Size is not the criterion here.

Not being in touch with our feelings, or not being able or encouraged to express feelings directly, also has other consequences. It means we tend to look to “facts” as representing truth. Many of the essays here attempt to describe dispassionately because that is what is seen as needed. Feelings would be out of place, would introduce personal opinions, would lead to chaos and general uncontrollability, which is scary. Above all, we must have order, even if it is marching towards our own self destruction. There is still an aroma of hysteria about someone feeling deeply and expressing that. It should be kept behind closed doors. Or it can be expressed on protest marches, accompanied by police cordons to see it doesn't get out of hand.

I am not here recommending violent disorder. What I see is that it needs to begin with us, with us feeling, being in touch with ourselves and being able to express those feelings without guilt or shame. This is the work for each one of us, together or alone. This is the foundation necessary for the family of human beings to learn to open their hearts to each other, welcome the differences, see the other as myself, and stop the madness of putting vast resources into manufacturing weapons of mass destruction, including nuclear. Bombs don't kill people. People kill people!

Anna Harris is a child psychotherapist. Her recent work focuses on the relationship between the experiences of birth, infancy, mental illness, and societal problems, with the aim of fostering a regenerative, life-affirming consciousness. 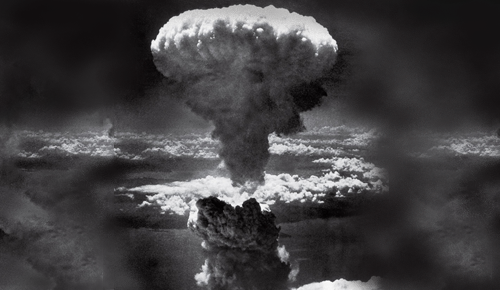